Carotek would like to thank James P. Taylor, Mayor of the Town of Matthews, for issuing a proclamation on September 23, 2015, recognizing the fiftieth anniversary of Carotek, Inc. and wishing the company continued success in the years to come.

Whereas, The Town of Matthews is proud to celebrate Carotek, Inc., on the occasion of its fiftiesth anniversary; and

Whereas, Carotek was incorporated in 1965 by its founder James Addison Bell, who worked out of his home, car and briefcase until the company's move to Matthews in 1972; and

Whereas, James Addison Bell was the founding President of the Matthews Chamber of Commerce and served on the University of North Carolina Board of Governors as well as serving as a Commissioner of the North Carolina Rules Review commission; and

Whereas, Carotek has built a solid reptuation for fifty years by meeting the demand of a complex, high-tech industrial environment in a wide range of industry; and

Whereas, Carotek has survived challenges brought on by economic downturns, increasing regulations and a continually changing business environment while providing services and leadership to its customers; and

Whereas, Carotek has set the standard in industrial pump, valve, and process automation instrumentation distribution and training through innovation, outstanding customer service and continual customer focus; and

Whereas, Carotek could not have accomplished any of this without its world-class employees and their shared dedication to excellence; and

Whereas, Carotek will continue to serve as a leading corporate citizen in our community as an exemplary employer and corporate leader for generations to come.

In witness whereof, I have hereunto set my hand and caused the seal of the Town of Matthews to be affixed this 23rd day of September, 2015. 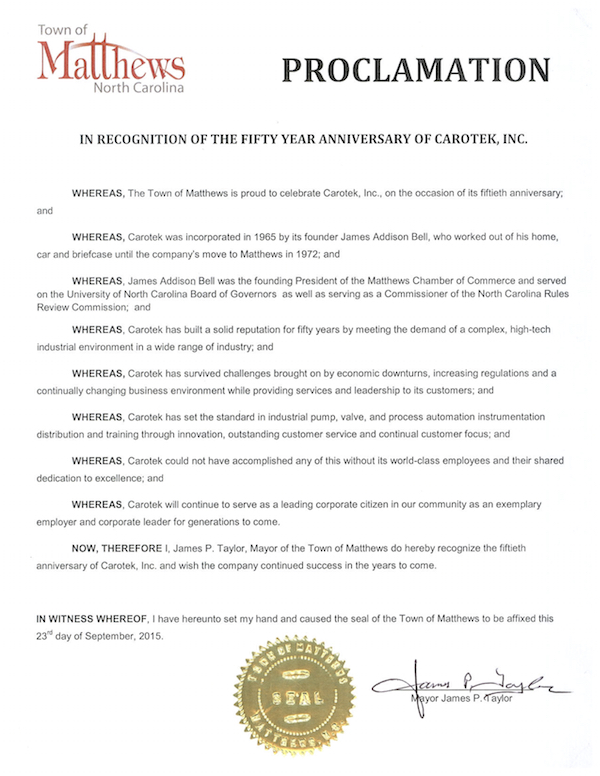