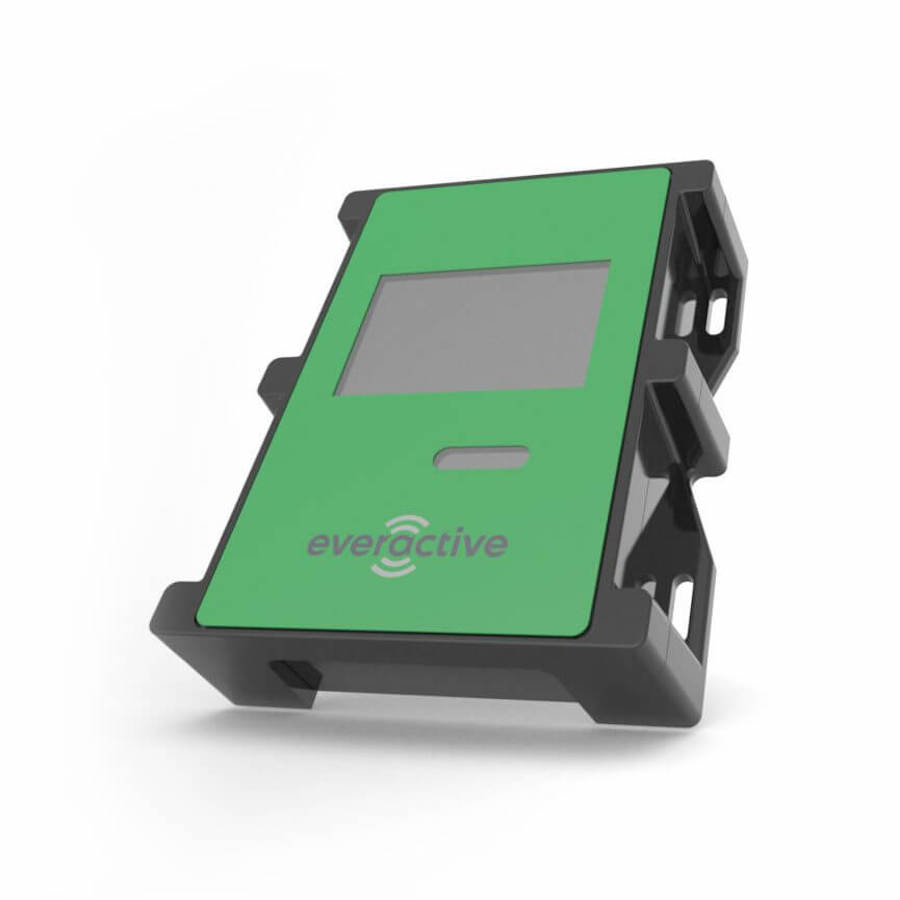 QTY
Add to List
×
Global costs of steam trap failure add up. At a 20% steam trap failure rate, the cost of wasted energy would be $53 billion dollars, and the CO2 emissions would total 232 million metric tons. Traditional solutions require much maintenance and monitoring.  Everactive technology eliminates the challenge by offering a wireless, self-powered solution.

You can have real time visibility into your steam system by continuously monitoring steam traps wirelessly. Unlike manual inspections or intermittent readings from battery-powered sensors on a fraction of traps, Everactive Steam Trap Monitoring continually collects, transmits, and analyzes all your steam trap data, offering a holistic view of the performance of your entire steam system. Not only can you intervene more quickly to mitigate losses, but you can also make more strategic decisions about the operation of your vital steam system.

Hidden Costs and Dangers In Your Steam System

How to reduce the hidden costs and dangers lurking throughout your steam system with continuous, batteryless steam trap monitoring.

This paper will discuss the costs and risks inherent in every steam trap system.  We will then explain why two common “solutions” simply don’t solve the problem as well as they could.  Finally, we will suggest an easy-to-deploy, cost-effective answer:  a continuous monitoring system that uses batteryless sensors to deliver real-time alerting through the cloud, without the need for manual inspection — ever.

According to a report from the Federal Energy Management Program, roughly 20% of the steam leaving a typical facility’s central boiler plant in space heating applications is lost due to leaking steam traps.  And those are the traps that are “working.”  The Department of Energy estimates that between 15% and 30% of steam traps will fail outright if they’re not regularly inspected and maintained.  What does this mean for you?

The unfortunate truth is that steam traps leak energy, and many of them fail outright.  Which means that even if your company sticks to an arduous and time-consuming schedule of inspecting, maintaining, repairing, and replacing the traps across your facility, you’re still almost certainly losing at least some of the costly energy your steam system produces every day.  Worse, if your company doesn’t have a regular trap-maintenance process in place, you are even more likely to experience failures — which will add considerably to your costs, and could result in expensive facility-wide downtime, or even an explosion.

The Risks and Costs of Failing to Monitor Your Steam Traps

“Clogged Valve in New York Steam Pipe Blast.” Reuters ran that headline in a 2007 story about an explosion under New York’s Grand Central Terminal that killed one person, injured dozens of others, and “created panic in Manhattan.”  According to Con Edison, the utility company that operates the city’s steam distribution, the explosion was caused by a combination of rainwater buildup around a pipe and clogging inside a steam trap.

The costs of the incident were steep — in human suffering, lawsuits, and tens of millions of dollars in property damage.  All because of a clogged steam trap that couldn’t drain the excess water building up inside the pipe.

The takeaway:  your steam traps need continuous, intelligent monitoring that can detect — and report to you in real-time — trap health and the possibility of a near-term failure.

Steam pipe explosions are fortunately rare, but they are not your steam system’s only risks.

Consider a Department of Energy calculation of how much money a hypothetical plant could lose to steam-energy loss caused by a single steam trap that was stuck open.  If that trap’s opening were 1/8 of an inch, and the value of steam were $10 per 1,000 pounds, the opening would be leaking 75.8 pounds of steam per hour and costing the plant $6,640 per year.

Multiply this problem across, perhaps, 10% of all steam traps at your facility — a conservative number, given the Energy Department’s estimates — and you can see that failure to adequately inspect your steam traps is likely costing your company considerably.

Steam trap failures can lead to larger equipment failures, which can bring a facility’s production to a complete stop for days.

In fact, a steam trap-related facility shutdown can ultimately cost a business many hundreds of thousands of dollars in direct repair costs and millions more in lost
productivity.

Failure to regularly inspect and repair your steam traps can put your staff at risk, which can also put your company at elevated risk of employee downtime, increased medical expenses, and even legal action.

In its guidelines on reducing emissions of greenhouse gases (GHGs), the EPA states that maintaining steam traps helps businesses reduce emissions of CO2 and other GHGs by up to 10%.

When you consider that an industrial plant might have many hundreds of steam traps across its facility, and that a refinery or chemical processing complex might have thousands or even tens of thousands, you can see why manually inspecting might never rise to the top of the priority list for an organization’s plant operators.  A few data points tell the story:

The Department of Energy recommends inspecting:

In fact, according to the AIChE’s findings, a 1,000-trap facility that waits just one year to conduct its manual inspection of these components can expect $80,000 in unrecoverable losses due to the combination of inspection labor, corrective action needed for trap maintenance and repair, and the costs of replacing failed steam traps.

As you can see, coordinating a facility-wide physical inspection and review of all steam traps can be an enormous, costly and disruptive undertaking.

Clearly, if you could instead redeploy your finite resources away from steam-trap inspection, and onto more productive or forward-looking initiatives, your company could increase efficiencies without having to add to your headcount.

But for an organization that still conducts regular, manual trap audits, a lot of key staff are forced to take time away from other productive tasks.

Nor are these the only drawbacks of manual steam trap inspections. Consider the following:

A more modern approach to steam trap inspection is automated condition monitoring — installing a sensor near a steam trap that can monitor the trap’s health and wirelessly report that data at regular intervals to a central database or cloud-based dashboard.

The benefits of such a solution can be significant.  Rather than having to schedule physical walkthroughs of the facility at specific times to inspect each steam trap — and hope the traps don’t fail in between inspections — a company can receive regular, automatic status updates on any of its steam traps (or other pieces of equipment that need monitoring), for more seamless visibility into their equipment health and more timely alerts to problems.

But most automated steam trap sensors have one major drawback:  they require a battery.

As a paper delivered at the International Society of Automation’s 2014 Process Control and Safety Symposium pointed out, battery maintenance required of wireless sensors represents a drawback that offsets the benefits of the wireless cost savings.

Moreover, if a sensor’s battery is not replaced at the correct interval, the sensor will fail. That means the facility will eventually have no visibility into the health of that steam trap — because it will have neither the information from a regularly scheduled inspection nor any status updates from its dead wireless sensor.
And of course, the larger problem is that even if the company does establish a schedule for physical walkthroughs of its plant to replace batteries of its steam trap sensors, it has traded one costly, time-consuming and labor-intensive undertaking for another.

A related problem is that, because each time an automated sensor takes a reading and sends a report, it draws down a portion of the sensor’s finite battery life. As a result, most automated solutions cannot take continuous samples, but instead conduct less frequent readings.

Finally, it’s important to understand that sensor-manufacturers’ typical claims about battery life would be accurate only under ideal conditions — which are rare to non-existent in most real-world plant environments. For example:

The ideal solution, then, would be an automated sensor that could somehow operate by powering itself, allowing it to both:

A new solution solves all of these problems for your steam trap monitoring and maintenance strategy — allowing you to eliminate costly physical inspections of your traps, receive continuous trap data and predictive analysis through an online dashboard, and use self-powered sensors that never need a battery replacement. 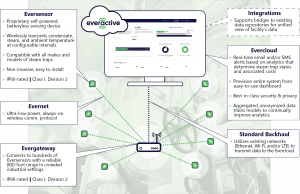 By deploying wireless sensors across your facility that are powered entirely by energy they harvest from their environment — and will therefore never die or “run out” — you can realize all of the benefits of continuous health monitoring and failure alerts of your steam trap network without the ongoing responsibility for sensor maintenance or battery replacement.

The Everactive platform can help you solve all your company’s steam trap monitoring challenges simultaneously, through: 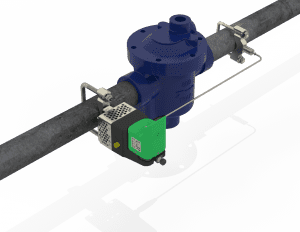 Most wireless sensors take temperature readings at relatively long intervals.  The reasons these sensors need to be somewhat stingy with their spot-checks, as you’ve probably guessed by this point, is to conserve the device’s battery life.

The problem, though, is that a lot of atmospheric factors are contributing to the temperature around a steam trap at any given moment.  A series of spot-checks taken 15 minutes apart, therefore, could create erroneous temperature readings, yielding false positives or false negatives.

This is one crucial area in which self-powered sensors outperform every other solution:  they can actively monitor traps continuously — taking readings as frequently as every 10 seconds.  This much richer stream of data creates a far more accurate picture of any given trap’s actual temperature, as well as the overall health of all your facility’s traps.

A related benefit of the batteryless sensor’s ability to generate a continuous stream  of real-time temperature data is that these sensors can then apply intelligence to  that constant data stream — and actually become “smarter” with each additional  piece of data it collects from each trap.

This enables the self-powered sensor to actually become a learning machine — as  it collects, studies, and analyzes this data — and become increasingly adept at  identifying problem traps and even predicting failure events before they occur.