After years of using large internal gear pumps for asphalt flux, a roofing materials manufacturer suffered multiple shaft breaks in a series of pumps. These shaft breaks were uncommon in past usage and were brought to the attention of the pump supplier.

The team effort of the facilities maintenance team, the pump manufacturer and Carotek resulted in reductions of pump failures due to shaft breaks by analyzing the root cause of the breaks.

How the Team Diagnosed the Pump Shaft Break Problem

The pumps typically operate at 100 gallons per minute (gpm) and less than 100 pounds per square inch (psi) discharge pressure. The system uses a hot-oil heating loop to maintain the asphalt flux at a proprietary high temperature to reduce the viscosity of the product enough to allow smooth flow and reduce pipe wall buildup of solid asphalt flux. The pumps are operated by 30 horsepower (hp), 1,750 rotations per minute (rpm) motors and a gearbox that reduces the pump speed to 100 rpm for product flows of 100 gpm.

The pumps are used to transfer asphalt flux from tanks in a still yard to the final application of the asphalt flux on the process line.

The same pumps have been in use for more than 20 years in this facility. Normally the life expectancy of these pumps was much longer in this service, and this mode of failure was never observed in the past. It is important to note that the facility uses two versions of the same size pump for two different applications. One is considered a soft pump for asphalt flux applications and the other is considered a hard version for filled asphalt applications. The hard pump has a hardened steel rotor and shaft to reduce wear from the abrasives in filled asphalt.

When the shaft break issue was brought to the attention of the pump supplier, the quantity of failed pumps over approximately 12 months was six pumps. There were 18 pumps total in this application. In years past, the quantity of pumps failing in the same period was one on average. Some of the pumps had broken shafts that were sheared at the shaft/rotor connection while some showed the shaft had turned within the rotor, shearing the set screws meant to keep the rotor and shaft intact.

The sheared shafts were on hard pumps and the shafts that were turned within the rotor were the soft pumps. The failures were analyzed and the following results were determined and addressed as indicated. 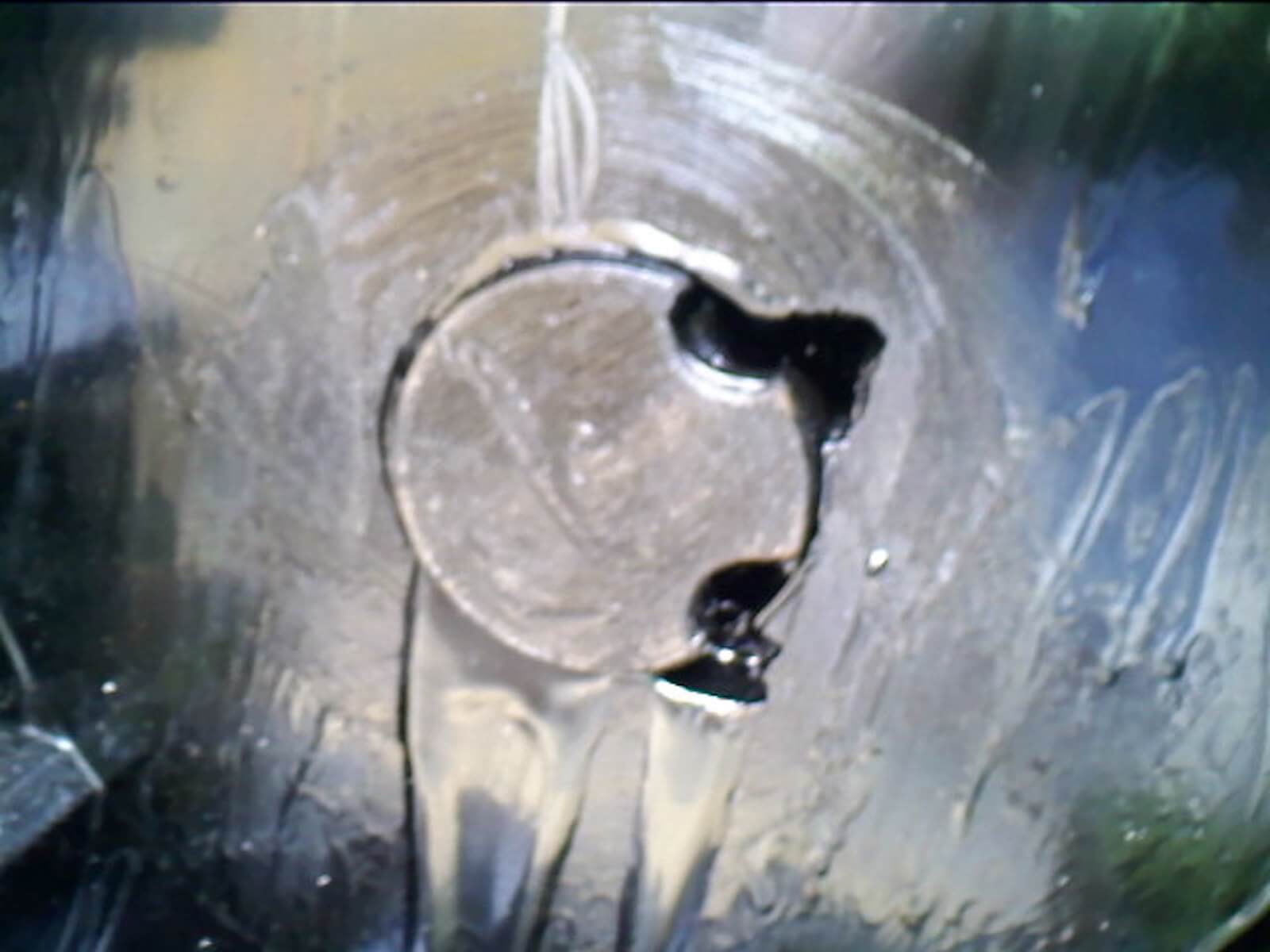 Image 2. Shaft turned within the rotor and sheared set screws (Courtesy of Certainteed)

Analysis of the Pump Data

The pump supplier and manufacturer carefully analyzed the pumps with broken or turned shafts. Dimensional checks and metallurgical analysis of the shaft and set screws were conducted. Both were found to be within the manufacturer specifications. Once the pumps were burned out to remove residual hardened asphalt, abnormal wear patterns in the pumps showed excessive discharge pressure had deflected the shaft and forced the rotor into the suction side of the pump casing (see Images 2 and 3) 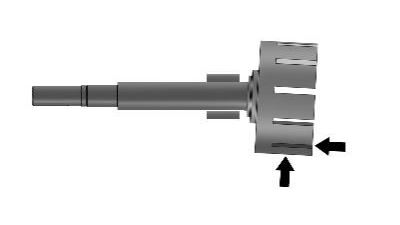 The manufacturer analysis read that “subsequent overpressure resulted in shaft bending, which in turn resulted in casing wear, head wear and eventual rotor/shaft assembly breakage.” In some cases, the shaft turned within the rotor, shearing the set screws and disengaging the rotor from the shaft. This analysis led to design changes in the pumps by the manufacturer and an analysis of operating procedures of the process within the facility.

The pump manufacturer’s published maximum discharge pressure is 150 psi in this pump partially due to the shaft size and subsequent length-to-diameter (L/D) shaft deflection ratios. Any excess of 150 psi could cause shaft bending and deflection as was seen in the failures at this facility.

Standard operating procedures at the facility compensated for the 150 psi maximum allowable discharge pressure, and measures had been taken to see that the temperature and viscosity of the asphalt flux was maintained such that the discharge pressures would not exceed this limit. In fact, pressures rarely exceeded 100 psi, as was indicated in process information later gathered by the facility maintenance team.

However, there were considerations of whether energy savings initiatives may have caused excessive discharge pressure beyond the maximum allowable discharge pressure of the pump. During downtime at the facility, such as weekend shutdowns, temperatures maintained on the asphalt flux via hot-oil heating loops were reduced to save energy. After investigating, it was determined that the start-up time to bring the asphalt back to acceptable temperatures and viscosities may not have been increased to compensate for the lower weekend downtime temperature. Therefore, the asphalt may have been too cold and viscous at start-up after the weekend shutdown and discharge pressure on the pump exceeded the 150 psi limitation. There were no records of temperatures and pressures during these start-ups or pump failures, so this hypothesis was assumed.

Once these factors were considered, the manufacturer took measures to address the pump shaft deflection, and the facility maintenance team focused on addressing the standard operating procedures. Each group took action to resolve further shaft failures.

The pump manufacturer made a design change in the pump to incorporate a larger shaft. The shaft diameter was increased by 40 percent.

This design change later became the standard for this size pump for all future builds by the manufacturer. There was no change in shaft diameter at the drive end of the pump, so existing power transmission equipment such as sheaves and couplings will still apply to the pumps.

The facilities maintenance team reviewed the standard operating procedures specifically related to shut down and start-up procedures regarding the asphalt flux temperature loop. Changes were initiated to prevent the occurrence of “cold” start-up conditions. 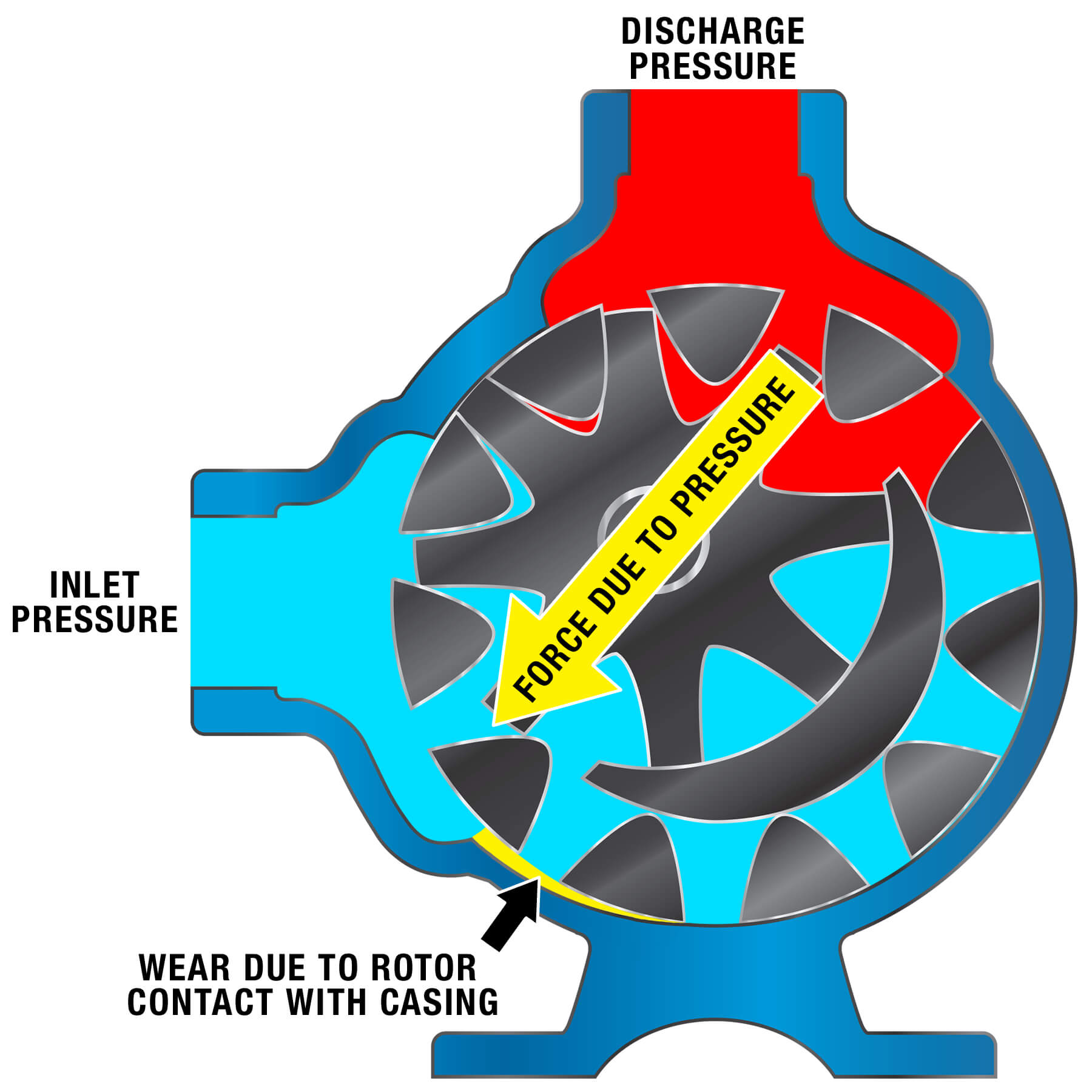 By determining the pumps were over-pressurized through the analysis of the wear patterns in the pump, the team was able to focus its attention on why the high pressures were occurring and what could be done to prevent future shaft breaks and unwanted downtime.

The facilities management team diligently looked at the product temperatures and viscosities during run conditions, shutdown times and start-up times. They determined that changes in operating procedures could be adjusted to prevent a cold start-up condition that could increase viscosities in the asphalt flux and cause high-pressure spikes. The pump manufacturer agreed that a larger shaft in this size pump was achievable and would allow for less shaft deflection and higher pressure capabilities. That design is now the standard product for the manufacturer.

The team effort of the facilities maintenance team, the pump manufacturer and the pump supplier resulted in reductions of pump failures due to shaft breaks by analyzing the root cause of the breaks.

Initiatives were taken by all parties to prevent similar failures in the future. Since the standardization of the larger pump shaft by the manufacturer and the attention to temperature loop conditions by the facilities maintenance team took place, failures due to shaft breaks were completely eliminated in these applications. Since 2012, there have been no shaft breaks causing unnecessary downtime in this facility.

Next time you have a pump problem, ask us for assistance with your pump repair and maintenance.